I saw a link on a local events website about moonlight paddle trips.  And I thought, hey, I can do that myself. So tonight I did.

Fish were jumping, birds and frogs were very noisy, I even saw a blue heron and an osprey.  I was a bit worried when the thrumming frog chorus started to sound like the "Jaws" theme, but I continued on.  It was a very nice trip, and though I didn't take my camera into the kayak with me, I did snap some pictures before and after. 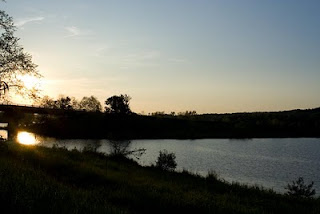 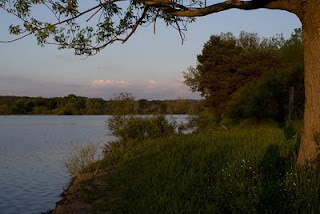 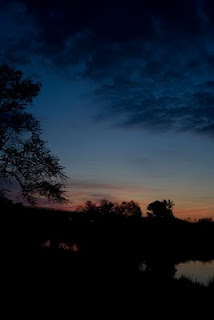 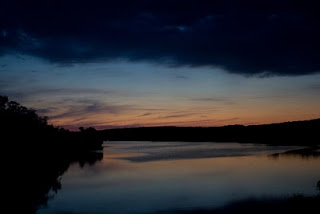 I hope to get out again tomorrow or Thursday with less cloud cover.
Posted by Hrach_Garden at 9:43 PM No comments:

So.  I know it's been a while.   First big news is we found a swing-set.  The baby is so happy.  I didn't really know someone could be pushed on a swing for hours at a time until now.  And I can swing too!  Just Jason has to push the baby while I swing.  But it still works out. 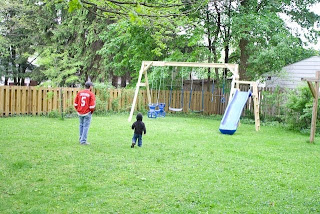 This is it the day after they installed it.  I decided I didn't like the pressure treated look, so today I stained it. 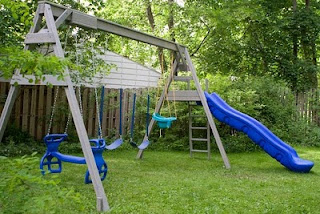 Now it looks like it's been exposed to the wind and rain for years.  I like how natural it looks, even if I did stain my hands more than the swing-set.  Oh, well.  I've never been one for precision.

I also decided to build another raised bed.  That brings the total to 3... and I have 2 more in mind maybe before the end of the summer... i just have no idea how i'm going to get dirt back to fill them if I put them where I want... 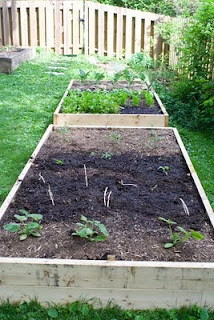 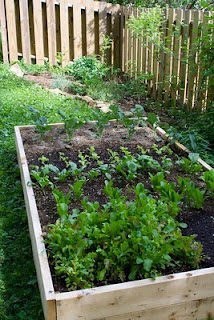 We're enjoying our lettuce already, and I've started to hand pick pests off of the broccoli.  I need to find myself a few toads and encourage them to hang around. 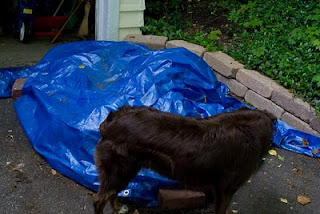 I have a giant load of mulch that I picked up, and I still need to finish putting it into the beds... but I guess I didn't really need an entire truckload... I will soon be mulching around ever darn thing in the yard.  The painters finished our house, the gardens are pretty well underway, and now I can spend the rest of the evening taking a brisk run, then maybe falling asleep on the couch. 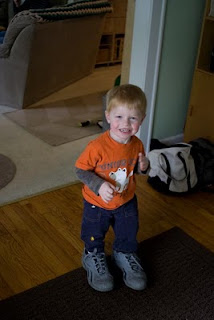 No, even if you wear daddy's sneakers you can't run with me sweetie.
Posted by Hrach_Garden at 5:08 PM 2 comments:

A Rose by any other name...

might look just as pretty as these, but I saw the pink and cream one at a plant place right on 322 in Wyattville (great place, tons of selection.  Go there.) and picked it up.  I found a great place for it in my front garden, so picked up two more today after garage sales. 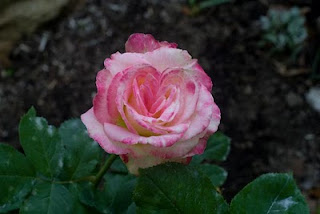 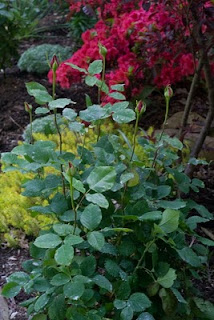 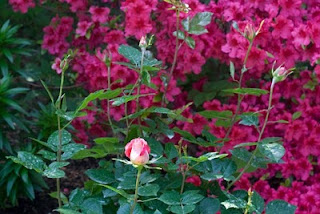 I like roses... I mean, I'm not a rose freak, but I think they're very beautiful, and these ones smelled amazing.  I have a few nice love scratches from them already.  They are all Jackson and Perkins roses... which I'm not sure what that means, but if you want more info.. you can go there.
Posted by Hrach_Garden at 4:24 PM No comments:

So I got up this morning, saw it was a beautiful day, and decided to build another raised bed.  Because I like growing my own food a lot.  And I think my husband might have me committed if i mention chickens again.  Sigh.  Oh well.  I'll keep chiseling away at that.

So I headed out to the local Home Depot, bought some wood and some new screw bits for my power drill (having ruined the other ones I had on my last raised bed), and headed home.  First I mowed the grass.

So last summer, our old lawn mower finally gave up and died.  Plus it used soo much gasoline that I wanted to get something slightly greener, even if it was still a gas mower.  We got a model with a bag.  I was so excited.  I bagged the clippings and added them to my compost where they turned into wonderful food for my gardens.  It also had a mulching feature, which I had read and heard is very good for yards.

Today, after much consideration, I decided, I would not bag.  I would not blow the clippings out of the yard in a certain direction!  It was time to mulch!  And mulch I did.  I feared of clumps of clippings dropping off the blades and leaving ugly green masses that would turn brown and then kill the grass under them.  This did not happen!!!  I was thrilled.  Even the dense grass that I hadn't mowed at all yet this year didn't clump.  And now the clippings are embeded in my grass to feed it!  I am pleased.

So I had the area for the raised bed mowed(sorry about the tangent).  And I got to work.  Mom watched the baby, and I got most of the base done, and finished the second layer after hubby got home.  I think it turned out very well.  Tomorrow I will get dirt and mulch and really work on my gardens. 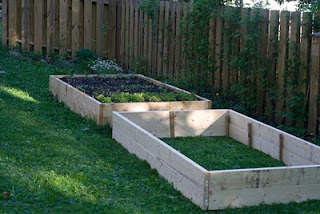 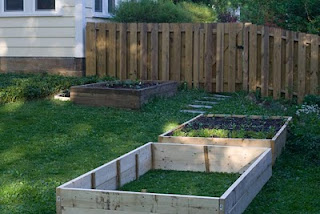 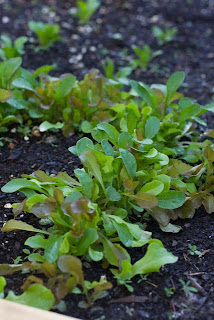 My mescalin mix is almost ready to eat! 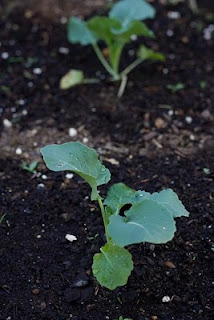 The broccoli is also doing well.
I really love growing my own veggies.  I hope to get some of the tomatoes in in the next couple of days, depending on my dirt progress tomorrow.
Posted by Hrach_Garden at 7:43 PM No comments:

Waking up to the sound of rain always makes me feel better...  today I woke up to a downpour, but by the time I actually climbed out of bed, the skies were clearing, a soft breeze was blowing, so I packed up my boy and the dog and said, "We're going hiking!"

Forget the fact that my back is being iffy.  No pain, no gain, right?  Hiking today included the two and a half year old walking by himself, but with me toting the baby-backpack, to load him into when he got tired (which I estimated would be about two minutes).

Oh, how wrong I was.  So we drove to Oil Creek State Park, home of my beloved Girard hiking trail, A trail circling the entire park.  36 miles of hiking goodness with steep hills and gentle rolling fields and many off-shoots and loops to customize your hiking trip.

Today we started at the parking lot by Drake's Well, and went up the Girard trail.  The dog and the baby led the way. 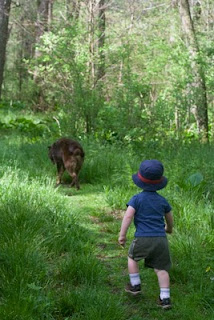 Lush and beautiful and a bit wet from the rain, but I was hoping to catch a glimpse of some red efts.  The boy was undaunted by puddles or rickety bridges or steep climbs.  I let him drift along at his own pace, helping him on the steep clambering parts, but he did really well.  The dog following kept him motivated. 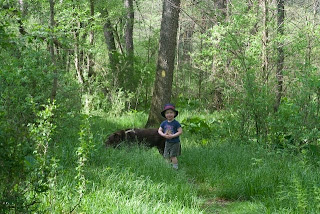 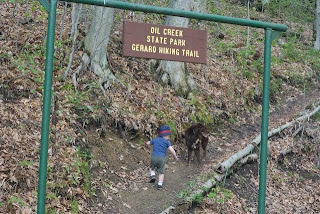 Also, I had him keep an eye out for the Yellow "Markers" as he started calling them.  "Right DERE!"  he would exclaim whenever we came to one.  Once the hill became a little too steep and the rocks and roots were impeding his ability to walk without yelling "UP-Pees" each time, I loaded him into the backpack and clambered up the steep hills myself.  Now listening to him chatter about "down, down, wagon, wagon" was a bit frustrating, but after promising him a "ba-nola"(granola) bar when we came to a certain big rock, he was happier, and continued to point out the marks. 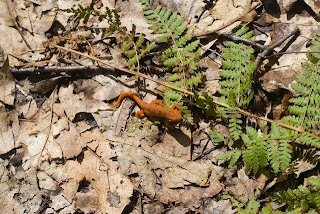 Yay!  I finally got to introduce him to a red eft.  "Turtle," he said.  "Salamander," I corrected.  "Salamander."  Off we continued.  We stopped at the rock that I remembered, had our snack, then he continued on foot again. Only now, the dog wasn't wanting to lead, and he was doing "red mean stop, green mean go."  Which was not making the trip much faster.  It was ok.  We were having fun. 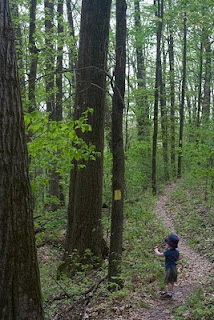 He continued to point out "Leeelllleeellleeooowwww" Markers as we walked.  Finally I coaxed him back into the backpack and walked the rest of the way with him.  We came down to the bike trail, which saved my legs a bit, and though he insisted it was a road, there were "no cars coming."  So we were ok.  The smaller trail continued towards the creek at one point.  "How bout that way?"  He asked.  I told him mommy was tired.  Next time.

I pointed out Trillium and violets and dandelions to him.  We walked about 5 miles total, and I have to admit, my back, nor shoulders, nor shins appreciate it, but I'm happy that I'm making a nature appreciating hiker out of my little boy.  It's great when he pats seedlings on the trail and says, "nice tree." 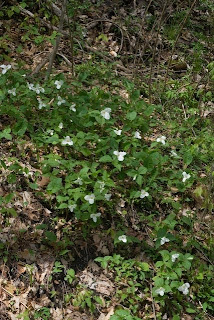 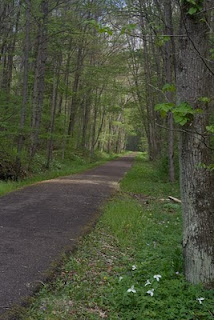