I Will Learn to Love the Skies I'm Under 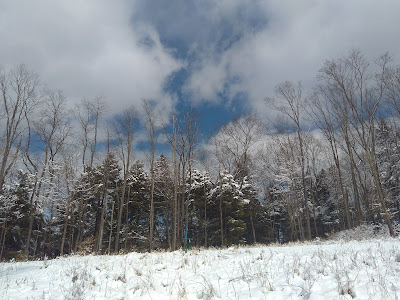 It's been a while since I've written here.  I've sat here a few times, and pondered deep words and not easy words to write about how I've been doing great, or not so great, how I've been putting in the miles and the time, and how it's much much harder to keep going and doing than to just lay down and... not.

But I've never been one to take an easy road, so here I am, a year later, and on my own.  Well, I mean, I have support.  I also have my son, and my pups, which whom without, I would be lost.  But I've been doing this on my own now for over a year.

And I'm... ok.  I don't want to say I'm great.  And I'm happy, a lot of the times, but happy is such a simple, vapid word.  I'm strong, and I'm satisfied.   I'm discovering what I'm capable of, and I probably should have known this about me a long time ago.  I'm not bad with money.  I'm able to figure out grocery shopping, bills, finances, car stuff, kid stuff, vacations.  Hell, I did my own taxes.  I'm faceted and talented and I'm feeling confident in myself for doing a great number of things I didn't think possible.

But in a lot of ways, my world is very very small now.  I don't really go out much besides to the woods.  My circle of friends has shrunk.  There is a stigma for me against doing things; to assume things that people think about me, and to be social is scary.  It's harder to stand alone under this idea of me, than it was as a family entity.  There was a safety in that family thing, and now it's this just me thing, and I feel shut out.

I was always myself even when I was married, but now that I'm not, I'm not quite sure how to be.

I don't exactly think anyone is shutting me out, but I'm shutting me out of things. I'm not spending as much money, so driving far or going out for food or drinking is not very enjoyable.  I'm working a lot more, so staying up to do anything, or making plans during the week when I'm exhausted is not probable.  And my kid comes first, and being point on his care has also made me make some social sacrifices that I'm not entirely sad about.

There is still some shadow on me that I let sit on my shoulder and tell me bad things about myself, that most days it's easier to just let it eat at me, and lay in bed, or go alone to the woods and just try to figure out my path.

Things aren't easy right now, but I've never been one to hide from what I'm afraid of, so we'll just see where the next pages turn.
Posted by Hrach_Garden at 11:02 PM No comments: