The Glacier Ridge Ultra is kind of like that.  Not that it's painful, or nightmarish (at least not too nightmarish), but I've run it before.  I ran the 50k in 2013 - I remember it being muddy and slick and cold and terribly difficult, but that didn't stop me from signing up for the 30k in 2015.  The 30k was hot, slightly less muddy, but so humid and hot and that last mile seems to take years.

So I signed up for the 50 miler.  You see, I try to be a completion-ist.  If there are a series of somethings, especially when they're close by, I like to do all of them.  So, I've run the three different Ultra distances at Oil Creek, so I wanted to do the same for Glacier.

So I signed up last winter, and somehow convinced my good friend Alisha to join in on my craziness.  She had also done the 50k and 30k in previous years, so it was easy to get her to join in on the fun.  My friend Kim (who is wiser, I believe), decided to stick with the 30k.

The Glacier Ridge Ultra takes place about an hour north of Pittsburgh, and an hour south of where I live in Meadville.  It's in this beautiful state park, called Moraine State Park with this gorgeous glacial lake, Lake Arthur.  The race is mostly single track or double track with a lot of ups and downs, swamps, a few flat sections, and mud.

We started out this year just wanting to finish.  I started my training this year strong - lots of running, lots of gym workouts, weights, stair climbing, long hikes.  Then I got a new dream job.  So now I'm working two and a half jobs and *bloop*  bye-bye regular training schedule.  I had a very challenging 25k a month before the 50 miler would occur, and I bruised my knee good in that race, so I didn't run much because of that - still fit walking and hiking in, did a few runs, but nothing like my brain and guilt felt like I should.

But I tried not to panic.  Race weekend was here.  I have to say, I was relaxed about it.  I did want to finish, but only just.  The cut-off for the Glacier 50 miler was 14 hours.  I'd done the math, that if we just kept averaging a little more than a 16 minute mile, we'd be golden to finish.  Thursday and Friday, I threw my stuff together in between work and home duties, Friday I headed to Alisha's to spend the night (she lives a good 40 minutes closer to the race than I do).  We had a nice meal, relaxed on the couch and watched tv after, and got a decent night's sleep.

The forecast for Saturday called for rain and cool temps. I was fine with this.  Nothing ruins a race for me like the heat.  We woke up to cloudy skies, but no rain, and we drove to the race start.  I was wearing shorts, long sleeves that I could push up easily, and my Oil Creek cap (to keep the rain off of my glasses).  We planned to stick together to get to the end of the race.  We picked up our bibs, took a pre-race picture, and headed to the start. 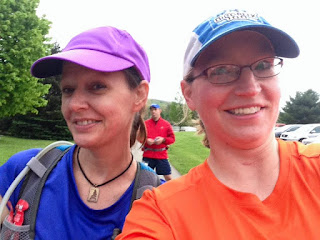 Alisha and I being silly at the start.


The sunrise was gorgeous, and we lined up, and started at 6:30 am.  I took my hat off into the first mile, since it wasn't raining, and just held it.  The trail was in good shape.  A little muddy from rain from the last few days, but nothing like previous years.  We were cheerful, we ate our gels early and kept consistent with that, and we met a new friend, Kelly, who said our plan to be slow and steady sounded good to him, and he would stick with us as long as he could.

We made it 10 miles to the first full aid station at 528 in 2 hours and 20 minutes - well ahead of our plan.  We only made a brief stop, and crossed a road, and then we found mud. 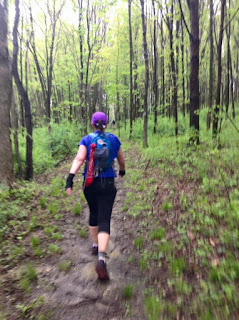 Some of the less muddy trail heading out of the 528 Aid Station towards Jennings.


I don't mind mud.  I don't really mind my feet being wet.  Living and hiking and running in Western PA, you learn to live with wet feet, and you find shoes that drain really well.  There is something about squishing and splashing through mud and sending sheets of water careening up to your knees or onto other people's legs that makes me feel like a little kid again.  So went the next 10 miles of the race.  This section of the trail had a lot of mud, but we were all moving great, having a good time, laughing when one of us would nearly lose a shoe(none were lost).  We got to the Jennings Aid station(mile 15ish) in the midst of this, and the trails were very run-able and not quite as muddy.  The mud was getting worse as we retraced our steps to the 528 aid station and about mile 20.  The three different races taking place were taking a toll on the trails.  We took a little longer at the Aid Station this time, eating and refilling bottles, grabbing things (like the all important Swedish Fish) from our drop bags, then heading out.

Now the next 20 miles consisted of a little bit of road and double-track.  We were walking a little more, but still doing great running downs and most flats, with a little bit of walking breaks.  The mud on this section was really bad because it looked like they had been working on them with some sort of machinery.  To make it worse, there were large hunks of aggregate stone hiding under some of the mud, which made footing tricky.  I was having issues on uphills.  I would fall behind on the uphills, then make up the time on the downhills, which I was still doing really well on. 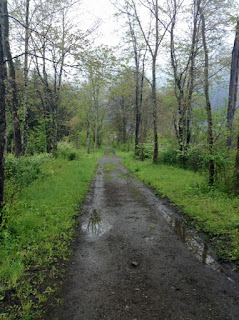 Flat miles of double track along the swamp.

So the pattern continued.  As speedy hiking as we could on the ups, and using gravity to run the downs, being careful of the muddiest spots.  I had one bonky moment in the last mile before we turned around for the long trip back to the start / finish area.  The turn around is un-manned, so runners have to tear a page from a phonebook, then carry it back to the previous aid station.  It's about a mile / mile and a half round trip up and down some gnarly hills with lots of mud.

I couldn't get any traction on the uphills.  I was getting left behind and couldn't get my energy up or my motivation to catch up going.  I always get very mean to myself when I'm low on energy and ready to be done with something.  Mean and low-blood-sugar-me told sad-and-falling-behind-me that I should give up, just walk, and let them go ahead - they would be better off without me holding them back.  I told mean me to get a grip, shook myself out of the funk, and grabbed a stick and started using it to help myself up the slick hills.  That did the trick.  I caught up, tore out my phone book page, and we turned towards the finish.  Ok... turned and thought about the 20 miles of mud left until the finish, but we hiked and ran on!

We retraced our steps through mud - walking all of the uphills, and really, the stick helped.  We were running / jogging as much as we could on the downs and flats, and we were all still feeling pretty good.  The couple miles of dirt road were a reprieve from the mud, and when we got back to the 528 Aid Station, I decided to change my socks and shoes.  The amount of mud that I wiped off my feet was impressive.  I did a quick wipe down of my feet, then put dry socks on and new shoes.  My feet felt so much better at once.  I grabbed some coke and a grilled cheese, and we were on our way.  10 miles to go.  Four hours left to do it.  Easy, right?

Hrm.  Maybe.  The next five miles were some of the most challenging miles I'd run.  The rest of the racers had come through, most were finished, and the trail was in shambles.  Uphills were super slow going, as we slid back as much as we moved forward.  Downhills were treacherous because we kept sliding out of control.  To make matters worse, I broke my stick on a downhill, and had to go without (I couldn't find another that was the right length or strength).

We all got pretty quiet as we concentrated.  We had thought that 4 hours would be plenty of time to finish the last 10 miles, but we hadn't accounted for the mud.  We crept on.

Finally, we came down a hill to the little pond that signified 5 miles left!  There was a water station there at the road crossing, and the volunteers cheered us on, which was a great boost.  We had 5 miles left, we knew we could make it.

And we did.  We slogged through - and there was a lot less running.  When we finally broke off of the trail and onto bike trail and road, Alisha, who still had some in the tank, took the lead, and Kelly and I shuffled / jogged / shuffled / jogged.  Alisha finished a few seconds before us, and we were finished!  My first official 50 mile race done!  And the Glacier Ridge Ultra-marathon trifecta complete! 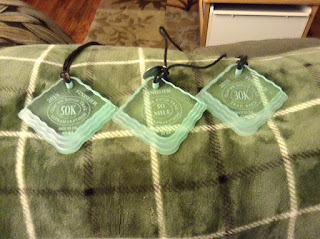 The trifecta of finisher awards!

And the mud.   I might be a little sensitive to mud for a little while.