A Rolling Hrach Gathers No Moss, But Maybe She Should?

There was a video game that came out a while ago, called Katamari Damacy.  You played as this... large rolling ball, and you rolled over things and they stuck to you.  You were gathering pieces of the universe, to put it back together.

The name of the game translates roughly to "Clumped soul," and what are we doing in life, so much as rolling through, gathering the things we want to stick to us, and letting those other things bounce off, or we roll away from those.  Yes, sometimes the bad things stick, but we work on getting those to fall off, or to become smaller, less signifiant.
----

So I spent my weekend with a lot of rocks.  Big ones.  Mountains. 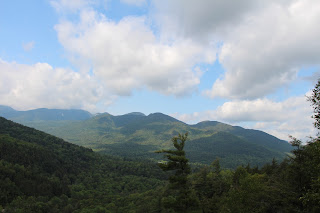 Don't ask me which mountain this was.  I'm not that good.

I took my son, Eli and my younger dog, Joxer.  Zoe spent a few days with friends, and we packed and set out.

Now this was my first post separation vacation.  Just Eli and I.  I was nervous during packing, I was nervous during leaving.  I was nervous in budgeting.  I made some lists, put the mail on hold, took a deep breath, and we drove six and a half hours to a small cabin in the Adirondacks.  I found a pet friendly one, sort of in the middle of the Adirondack park via AirBnB.  It would've been cheaper to just camp, but I wanted to do something nice, and be comfortable, and not worry about the weather.

Turns out this was the perfect choice.  We took our time driving up on Friday, and I packed food to cook while we were there, my own coffee, and all the amenities.  We also took the bikes and paddleboard. 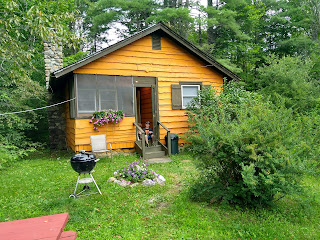 Our little one bedroom cabin.  Home for 4 nights.

The cabin turned out to be perfect.  Tiny kitchen, teeny bathroom, cozy family room, and snug bedroom.  Really, for an adult, a child, and a dog, perfect sized.  No, we couldn't fit in the kitchen at the same time, but since we were spending the majority of our time outside of the cabin doing outdoorsy stuff, it didn't matter how big the space was.  And it was sort of an eye opener on how little space we actually need.

So we explored.  The trails reminded me a lot of the trails I've been on in Central Pennsylvania, but even more technical.  But the views.  I can see why people go there and why people climb mountains.  I was nervous about pushing Eli to climb, and Joxer, but we climbed two very challenging smaller mountains, and we both loved it.  I think the only thing I regret is not sitting up there longer on either to take it in.  It's not like we were up and down right away, but a nine year old is only so patient. 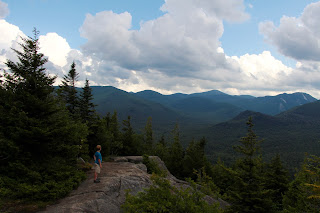 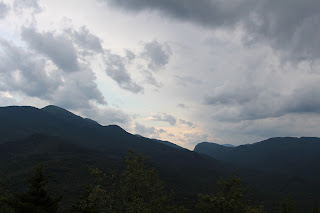 Storm clouds rolling away from mountains in the background from Mount Jo. 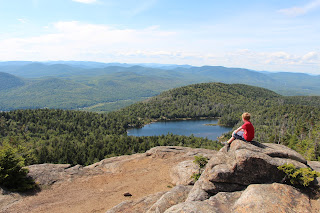 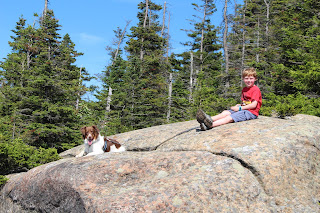 Relaxing at the summit. 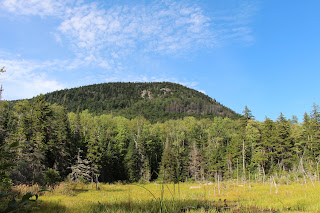 
I learned a lot about myself on this trip.

First, I can do it alone.  And actually, really enjoy it.  I wasn't worried about when we would eat.  I took snacks.  I made dinner when we got back to the cabin, whether it was 5pm, or 8pm.  And no one was grumpy about it.  Eli was happy to swim or watch the Food Network until dinner was ready.  I could have the dog, and he was well behaved and I wasn't stressed about him being well behaved.

And last, I'm allowed to be happy, without a partner. Without strings attached or compromises or some kind of conditioning.  Now yes, I had my son and my dog, but I called the shots.  I made the final decisions about what we were doing.  I had a bad day on Sunday, where my "things to do" research went awry, and I was more worried about Eli being disappointed that I let myself focus inward for a while, instead of figuring out a different way to enjoy my time with my son.  So I moped while we were driving away from our failed biking excursion.  It wasn't a long mope, or a deep mope, but it made me realize what I was doing, and that I was waaaayyy more worried about it than he was. It was good to realize, and we still made the best of the rest of the day.

So I'm rolling along, gathering as much as I can, trying to leave behind the stuff that just weighs me down.  And I will be going back to the Adirondacks. 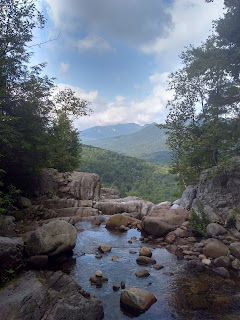