Detailed and poignant, Atwood once again displays strengths and weaknesses of both sexes in this novel set in Post-Depression and War Era Canada.  A family falling from the upper class, from grace, from Heaven almost, as the detailed characters float through the apathy that is life.

Or is it there life?  Atwood provides mystery and romance, deception and the frailty of both life and the strength of bonds, familial and perceived.

I enjoyed the book, even though it took me a while to really get hooked into it.  Eye-opening in regards to emotion and attachment, to the role women played in pre and post war environments.  Definitely a good book to pick up if you are an Atwood fan.  Not a comfortable or cheery book, but the story is deep and riveting. 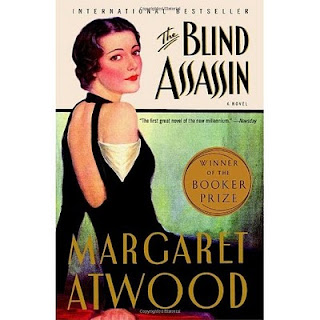 Posted by Hrach_Garden at 2:49 PM No comments:

So Jason and I were talking over the weekend about how mayo usually upsets my stomach and really doesn't do much for me taste-wise on sandwiches, and I had just read an article in my running magazine about substituting hummus for mayo.  So today, after napping and being lazy in general, I decided to whip up a batch. 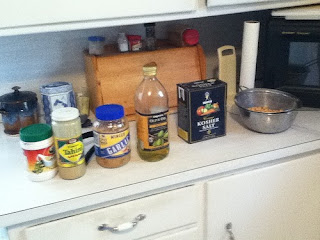 (Manda taught me how to make this version, your experience may differ).  I use canned chic-peas.  I tried using the dried ones in the bags, and soaking them over night, but they turn out... still crunchy and not as smooth or nice as the canned ones.  I drain the canned version, rinse them off a bit, remove any bits that float off while i'm rinsing them, then toss them in the miniblender.  I add about a tablespoon(more to taste) of Tahini (sesame paste).  I add a sprinkle of salt, just a bit, because I have had to pitch batches out that I won't eat because I've made them too salty.  (You can add more later!)  Then a sprinkle or 3 of cumin, a heaping spoon of minced garlic, or roasted garlic (if you've made some of that in advance, but, again, I was lazy and didn't have garlic heads on hand to roast).  Then drizzle in some olive oil. 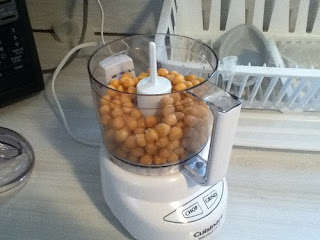 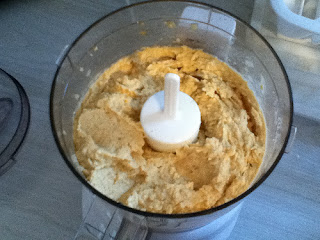 Grind/Pulse/Mash/Mix/Stir/Scrape until the hummus has a smooth-ish consistancy.  You may need to add a bit more olive oil if it's chunking up, or if the blender won't blend.(Foodprocessor/whatever).  Stick a spoon (or a finger) in to give it a taste, or a cracker, if you're so inclined.  Mine was pretty much right on, but if you need to add more tahini or if you like red pepper or paprika or... whatever.  This is not a science.  Play around!  Just be careful with the salt because you can get it too salty really easily. 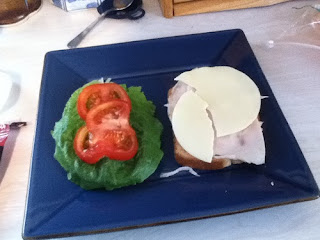 I then spread mine on really nice sandwich bread, with turkey and provolone and tomato and lettuce, and jammed it in the fore-man grill and Tada!  I stuck the rest of the hummus in a Tupperware container to hopefully enjoy on crackers and sandwiches for the rest of the week. 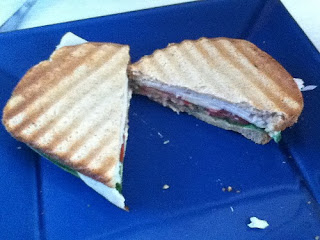 Panini!  Sort of.  Anyway, it was really yum, and my stomach is not yet rebelling!  Now to hope it digests in 2 hours so I'm ready for my run!
Posted by Hrach_Garden at 2:49 PM 1 comment:

So I found this recipe for fudge striped shortbread cookies... It seemed easy and I needed to work off some stress in the kitchen... 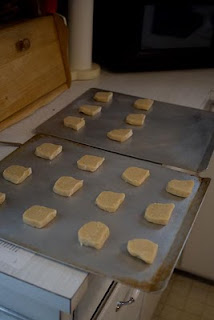 I had trouble getting the dough into a "log" shape.  I figured this was ok.  I wasn't interested in making them pretty, ok? 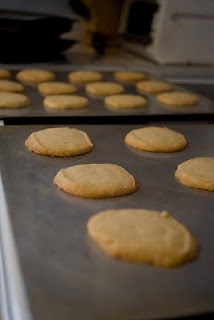 Golden brown at the edges.  I let them cool on the sheets for a while, because they crumbled a bit when I tried to move one.  About 30 minutes later they were cool enough to move to a rack. 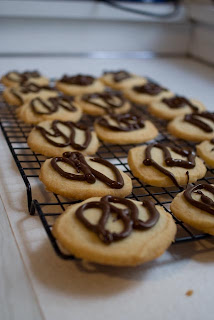 They turned out kind of pretty after I melted some chocolate chips then used a ziploc bag to pipe the chocolate over them.  Next time I will be smart enough to use a potholder to hold the ziploc bag while I squeeze the chocolate out.  I have a burnt hand because I'm silly.  They're... Ok.  They're not brilliant, but they taste ok.  I actually think I should have used a bit more salt, or used salted butter in the recipe instead of unsalted.  They came out a bit bland.  I'll have to get the opinion of my guys later this evening.  And try not to think about them being made from 2 sticks of butter.  Ugh!  Now I'm off to work out.
Posted by Hrach_Garden at 3:25 PM No comments:

I'm really, really ready for spring.  I'm ready to do long runs, work in the yard, go on long hikes with the kiddo and pup, get muddy and gross, and just be back outside in general.  I've been prepping myself, my house, my plants... but every time it seems to warm up enough for a tantalizing taste, we get hit with a snowstorm the next day and I'm back shoveling snow instead of dirt like I would rather be doing.  So I'm keeping myself occupied in the house. 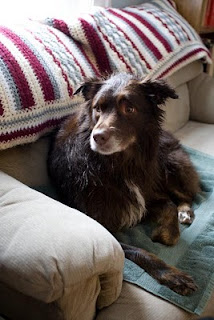 Such as keeping the dog shiny and clean.  She doesn't like baths as a rule, but is very good about them, then tears around like a crazy thing afterwards, rubbing herself all over chairs, people, and to my chagrin, snow.  Silly Pup. 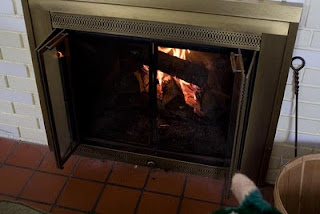 I also have made use of the fireplace more during the "cold snaps" or.. maybe we've been having warm snaps since we're so cold most of the time... anyway, yes I really enjoy the fireplace.  I have gotten into the habit of moving the couch right up in front of it and having a book and a cup of tea handy... or dozing... the warmth has helped after some of my runs recently.  I'm up to 4.5 miles again... it's a long way from the 31 miles I want to run this fall... we'll see if fate cooperates and i can get better at a training regime soon (if it would warm up!) 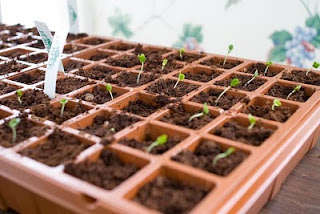 The sprouts!  This is after a week.  I planted them too early, I'm sure... the ground will still be frozen by the time they're going to want transplanted... sigh. 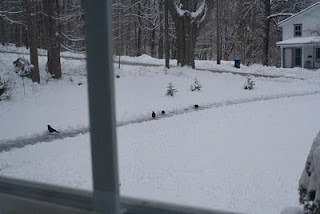 See!  Lots of snow.  At least the crows come visit me for my sunflower seeds I sprinkle just for them on the driveway.  I like crows.  Those of you who don't... Sorry.. I know I'm crazy. I have a thing for them since I had a "pet" wild one for a few months over one summer when I was little.  And yes, he was affectionately named "Caw" and ate roast beef at 5.99 a pound. 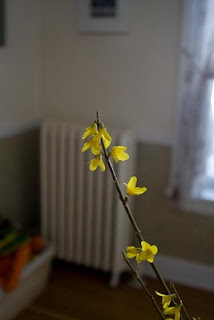 I needed some spring happy, so I encouraged some Forsythia to bloom early this year.  I don't mind that the real stuff probably has another month or more before it'll peek out, at least I have a little cheer on the dining room table... 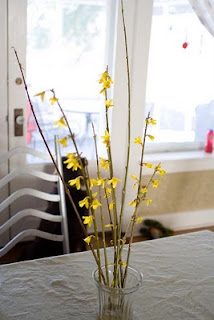 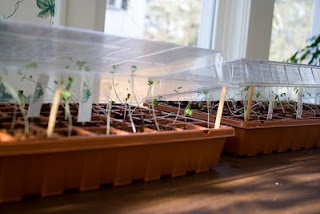 And here are the sprouts today!  ARGH!  At least I'll be able to transplant them into bigger pots probably and they'll be ok until the beds thaw.  Definately going to build two more raised beds to put in the front yard this year, and maybe a new garden bed for the Blueberry bushes that don't like the lack of sun in the back yard.  I figure the price will come to about $6000, (I'm hoping to get a used truck out of this whole landscaping thing... pipe dreams maybe, but we'll see... )

Supposedly it's going to warm up above 32 degrees today, which means trying for a long run when hubby gets home... I'm hoping for at least 5 miles, upping my milage a bit each time I run trying to get my endurance back after a long and lazy winter.  Here's to hoping!
Posted by Hrach_Garden at 9:28 AM No comments: