I love to run.  I really do, don't get me wrong.  But the reason I run isn't just that it makes me feel strong, it's gotten me in shape and made losing extra weight easier.  I run because it gets me outside.  It makes me feel wild and natural.  It's given me a reason to get more time in the woods or on the country roads that I wouldn't maybe make an excuse for, or wouldn't get as much ground covered if I were just hiking or walking.
I am a country girl.   Don't get me wrong, I enjoy cities.  I know they give us culture.  I like the theatre, and concerts, and museums and art galleries.  I like zoos, and science centers, I like eating a variety of different ethnic food, and seeing how people come together in places like cities to live and learn and grow.  I'll visit cities, big cities, but I'll always be a country girl.  Living in town right now is hard for me.  And I'm happy that I can run a mile and be back out in the country, running along corn fields and cow pastures.

I always loved exploring the woods and fields around my house when I was a little girl.  My friends went to the mall or to each other's houses and hung out.  I did that too, but sometimes I just wanted to go into the woods and catch frogs or climb trees or just find things that were exciting to me.
I don't live on a farm or really out in the country.  I miss it.  But I get out there.  Maybe someday we'll have a cabin or I'll be able to work on someone else's farm.  Because, nothing, really nothing makes me as happy as being out in the fresh air, doing hard work, and seeing myself accomplish something.  I think that's why I like running so much.  I do it for me, not really for anyone else.  I run to be IN the nature that I love.

Today's run was great.  I went slower than I'd like, but I saw heron and duck, an opossum.  I ran along cornfields and swamps and winding streams.
I got 17.5 miles in, and mapped some of those country roads. I saw neatly trimmed lawns, and overgrown abandoned barns and houses.  I was chased by a couple of dogs, and waved at by a number of people.  And you know what?  It was a good run.  So get out there, run where you love, do what you want, and find your happy, even just for a little while...

Posted by Hrach_Garden at 7:41 PM No comments:

This is a test of the emergency blogcast system. 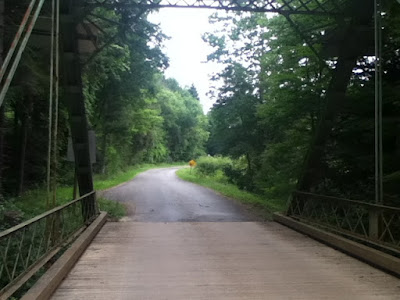 It's been a very odd summer.  For a while there in the spring, we had late frosts and late snows, and it seemed like warm weather would never arrive.  Then the past few weeks have been brutal, both heat and humidity wise.

I actually don't mind it.  We don't have air conditioning here, so it's been a dance of my husband's secret "Lock in the cool" skills as he opens the windows at night, and then I close them around mid-morning, before the sun comes up and heats everything.  The nights with a fan blowing on us have been comfortable.  I haven't lost much sleep.  At least not to heat.

Running has been ok.  I have gotten into a routine to run early in the mornings, or run in the woods on the weekends to hide from the heat.  The last full loop of Oil Creek State Park was brutal, but I think it has made me stronger.  I'm enjoying the adventure and challenge brought by the heat, because I'm nothing if not stubborn.

Today was lovely though.  I think mid 60s, breezy, overcast is my perfect running weather.  I wouldn't even mind cooler, but today... I got up, ran out the door, up the hill and away from town.  Along fields and past little country houses, smelling the scent of hay and sky and fields.  Oh and squished snails, but I didn't smell those, thankfully. Small barky dogs warned me away from their yards, and I ran and ran.

It was only 5 miles, but I made it back in time for my husband to get to work, and I was sweaty but not as hot or sweaty as I have been the last few times I've run.  I've been ok this summer, but this kind of day just makes me long for fall...

Posted by Hrach_Garden at 12:30 PM No comments: 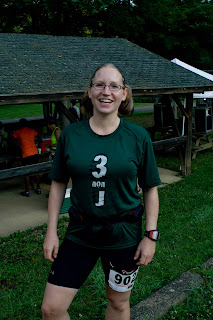