...then the first day of spring. 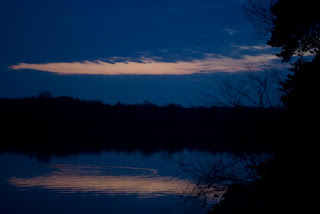 It was very cool and calm out there this morning.  I took my annual sunrise hike, found a good place to watch the sunrise, and just enjoyed the bird song, the sound of geese and duck wing-beats as they flew overhead... the circular current in the picture was a beaver that I think the dog and I interrupted while he was trying to nibble down some saplings. 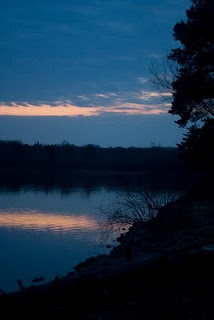 It was more overcast than I thought would be acceptable when I clambered out of bed at 6:30, but there was an opening in the clouds just where the sun would peek through eventually.  A good kind of day. 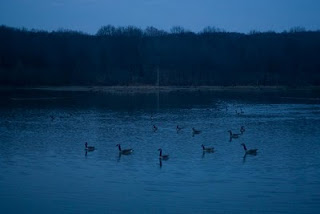 The geese were quiet when we first settled in our spot, but once we were there, they came over from across the lake to investigate us.  They honked and chattered at us a bit, but stayed about 40 feet out from us, just drifting there. 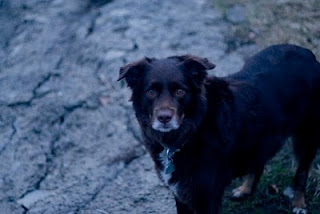 Zoe enjoyed herself once she realized we were not going on another 10 hour pre-dawn car trip.  I had to lift her into the car when we left, because she has come to associate getting in the car in the dark with very long car rides.  She happily tore around and sniffed everything, then sat with me while we both watched the sun come up. 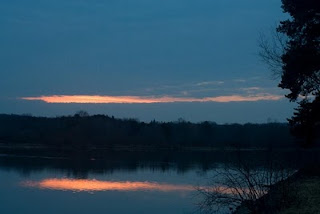 A muted, understated first sunrise of spring.  Lets hope it portends to a good calm season for starting things new and letting warmth and green get a foothold in the earth for another year.  Happy first day of spring everyone.
Posted by Hrach_Garden at 9:02 AM

Woodcock. But not near the dam. If you go along 198 until you see the sign for colonel crawford park, turn right on that road and cross the bridge that goes over the lake, take the next dirt road to the left and then there's an immediate left as you go onto that road into a paved parking area. Hardly ever anyone there and there is a gamelands trail, but it's super muddy at this time of the year, so if you go, wear boots.

I may go hit it at sunset tonight