I know rice pudding isn't everyone's cup of tea... or coffee.. or pudding... But I recently tried some when we were in Florida.  I liked it, I thought, I can make this.  So today I did.

I used the recipe here, and the only thing I altered was to add cinnamon.  Ok a lot of cinnamon, but I like cinnamon.  I used long grain rice, and all the reviews said to use a shorter grain rice and it would come out creamier.  I still think it tastes great, but if you have texture issues, or don't like raisins, then you probably won't like this anyway.

I was thinking of maybe putting pieces of apple in it next time i make it, either dried or fresh. 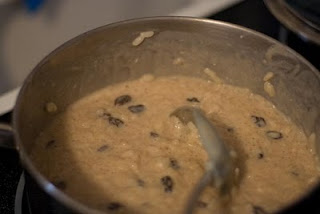 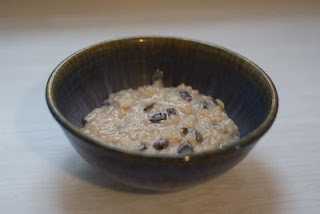 I think I also could have let it thicken up more, but it's all about experimentation.  And it's soo yummy.

Didn't have as a productive of a day as I would've liked today, but I stayed up too late, woke up late, and have been dragging a bit.  I did fix the toilet (the chain that pulls the thingie broke), and I bought some grass-seed to spread in the yard, and I looked at some pavers for a couple of the muddier locations in the yard.  I picked a natural looking stepping stone that i think i'll bury in the earth and let the grass grow around them.  I also want to construct 2 more raised beds, but I want to see how much painting our house this summer is going to cost first.

I took the pup out a bit ago to tear her around and get out a bit of her energy, and she found a walnut or some kind of beech nut or something, and was tossing it, rolling it around and batting at it.  So funny.  Of course I didn't have my camera outside to catch any of the action, but I'll try to get her to play with it again tomorrow.  Too funny.
Posted by Hrach_Garden at 5:43 PM