So I was in the mood for soup today. I had a dentist appointment in the morning, and I skipped the calling of the restaurants in Erie, and made for home, picking up a couple onions on the way. I was going to make soup!

When I got to the house, I realized I had forgotten celery, but celery be damned. I had carrots, onions, and frozen corn and peas. I was ready!

I got out my largest pot, a garish orange dutch oven I bought at a garage sale for three dollars. I love the thing. I put the heat up to medium-high, and put in a tablespoon of butter and a drizzle of olive oil. I tossed in the onions and a little bit of salt, and got them sizzling.

Meanwhile, I had taken out a little jar of organic chicken bullion out (called better than bullion; due to to my soy issues, it seems reliable), and put two spoons of it in some heating water on the back of the stove. I stirred the onions, added a little bit of thyme to the onions, and prepared another frying pan with a touch of olive oil for my now defrosted chicken breasts.

I salted and peppered the chicken breasts, and let them cook completely, about 3-4 minutes on each side (they were flat-ish, and had cooked slightly in the microwave). I poured my broth in with the onions, added the carrots, peas and corn and brought it up to a boil.

Now, I knew that I wanted this soup hearty, so I pulled out some linguine noodles that have been sitting in the pantry for who knows how long, took about 4 ounces of those, broke them in half, and once the soup reached a boil, tossed them in. I let the soup boil until the noodles looked... floppy, then I diced up the now cooked chicken, and tossed that in. I let the soup simmer together for another 5ish minutes, gave it a taste, saw how thick it was, and added a little more water in, which didn't seem to effect the chickeny broth taste.

Overall, it was a success. Blandish, in a comforting way. I wasn't really looking for spicy with a sore mouth and a scratchy throat. I hope that soup cures my common cold.

I like making soup now that my confidence with cooking has grown. Next time, I might try to not forget the celery, and maybe try something with leeks and lentils. Who knows! 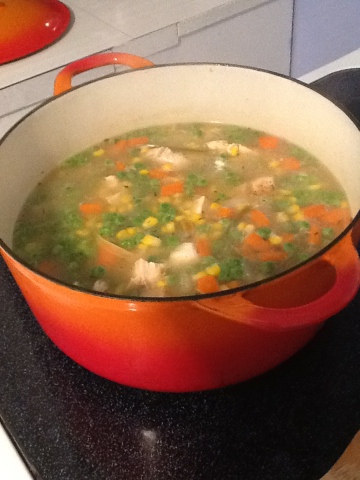