So I got a little done at home today, on what I was afraid would be a lazy day when I got up.  There is a wall in our library (guest room) that was painted red by the previous family, but it was done hastily and you could see roller marks, and though it was never a priority to repaint or fix it, has bothered me.  I thought of repainting the entire room, but jason enjoyed the one red wall look, so I got some red paint in a matching shade a couple of weeks ago, and so today I painted it. 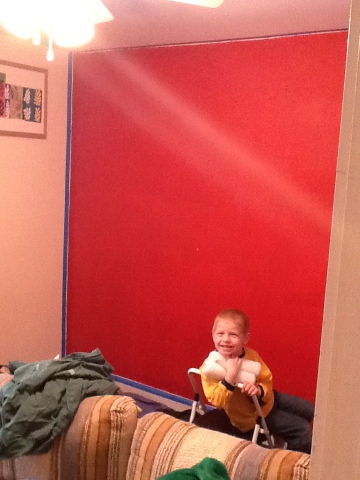 Before - with my helper 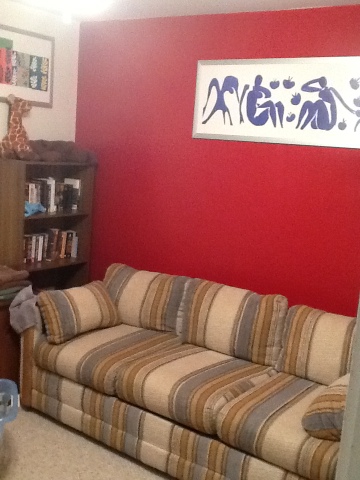 After - There isn't much difference, but the red is more... cranberry color than the orange/red that it was before, and the space feels a little more finished and less messy to me.  It didn't take but an hour to do and that included masking the edges, and cleanup, and letting Eli paint sections that I then went back over, but he was happy.

Then I decided to make bread bowls for dinner with baked potato soup.  They were fantastic!  I don't think I'll be doing them terribly often, because making the sourdough bread takes a few extra steps, but they were really tasty with the slight saltiness and herbiness of the baked potato soup.  The soup didn't even leak, and the bread was pleasant to eat after, not even terribly slimy and soggy.  I think they need a thick stew type of soup or something creamy and hearty, or even chowder-like.  I wouldn't want a clear broth type soup in them, but I'm extremely happy with how it turned out.  Now I'm heading to bed and hopefully get through a chunk of The Scarlet Letter tonight.  So many books, so little time. 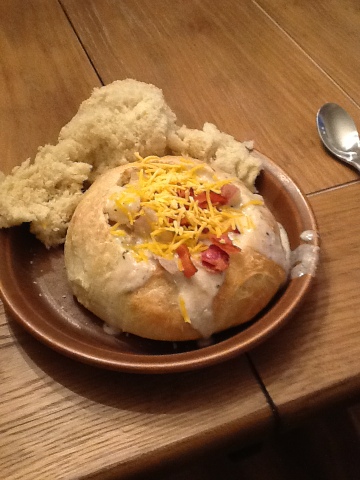