My first race of 2013. It was a half marathon. I woke up at 3:30 am, after some on and off sleep - which is generally the case for me on nights when I have to wake up early. I set two alarms, but I usually keep waking up and looking at the clock, to see if I overslept. I woke up, did my pre-race prep, gathered my things, had coffee and toast, and headed out the door by 4:15. I arrived at the sprawling Cuyahoga Valley National Park Ledges shelter around 6:00, and peed many times and visited with friends until the race started.

The difference between this year and last year? About 50 degrees warmer. Last year, 7 degrees, 10 degrees max. This year, it was 57 degrees when I got out of my car. I was glad I had worn short sleeves. I had also taken a wind-breaker, but I ended up wearing it around my waist for everything except the first half mile.

The other difference? It is actually a lot more difficult to run in mud than on frozen ground with a couple inches of snow on it. I felt like I was losing a couple inches each step in the muddiest areas of the course. I didn't mind. I got dirty, which I enjoy, and I still did fairly well, and there were many sections that weren't too muddy and I could get good traction. The bad part was how soggy my feet got. My shoes are normally great at letting wet out. Not so good with goop. I think I'm retiring the pair of shoes I wore today, which is ok, because I probably got at least 200 miles out of them.

I met a lot of great people on the course. I try to be really cheerful when I'm running. The first section was 8ish miles and the second section was 5ish miles. I was alone quite a lot, which I also didn't mind. I saw three deer at one point, who crashed across the trail in front of me (but didn't smash into my left side, which is good, because that happening 2 times last year was enough). The volunteers were great, and trail and ultra-runners are amazing.

The one little thing that miffed my day up a bit, was the fact I took a wrong turn, and worse, dragged another runner with me. There was a split in the loop, and I took a right when we should've gone left. I realized about halfway through that 1 mile extra, but there wasn't much I could do about it but go on. It demoralized me for a little while, because I had been doing quite well and would have broken 3:00 for a trail half marathon, which would have been great. I had been pushing hard the first half of the race, and when I realized my mistake, it took the wind out of my sails a little.

I kept going, knowing that it was all training miles, and not being a terribly competitive person(except with myself), that I would be ok. I finished the 5 mile loop feeling pretty tired, but I enjoyed the trail, even the muddy mucky parts. My finishing time was around 3:08, even with an extra mile added in, so I was happy.

Overall, a really good start to a new year in running. It was a fun day, and the weather was pretty perfect. I have some lofty goals for this year in running, and this race made me see where I am, which means I have some good training to do.

Tonight, I feel pretty good. I have the somewhat unhappy tummy from eating the gels that I eat when I'm running, and my knees are a little warm, but not too painful. My toes are probably the most sore, from being pruned and gritty, and also maybe from not having my toenails short enough for those kind of slippery conditions. Otherwise, I feel good after running 14 miles, which is the longest I've run since November. 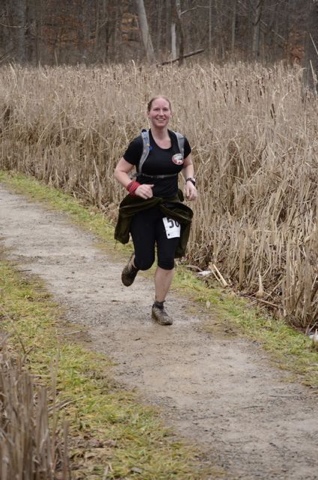