So yesterday was Zoe's vaccine update appointment.  She generally is very good about going to the vet, but she also knows it means her toenails will get painfully trimmed.  I used to trim them myself, but after having the vet do it once... she will not let me touch her feet without pulling, crying, and sometimes angrily curling her lip in ferociousness.  We got all her shots done, with baby in tow.

"Zoe up high to the sky!" The boy exclaims as Zoe is raised up on the platform.  "Zoe Medicine."  He says as the Veterinarian gives her her shots.  I think the vet was as impressed by the baby's good behavior as Zoe's.  They then took Zoe away to trim her nails.  She cried and yelped in the next room, which breaks my heart, but she recovers from pretty fast.  And at least she's not grumpy at me.  I got her a doggy rawhide doughnut, which didn't interest her much on the way home, but once we got here, she carried it around, attempting to hide it. 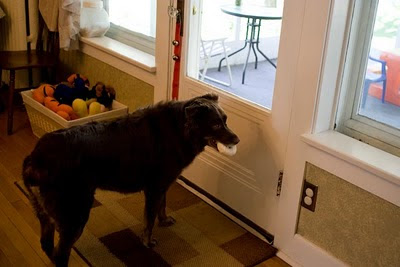 I didn't let her take it outside.  But I did later find her standing on the couch hiding it under the throw pillows.
Today I packed the kiddo and the pup in the car to look for a park where I will be running my next 5k in a couple weeks.  Two Mile Run County park, near Franklin.  I seriously never knew this place existed.  It's not near any really main roads, and it's just kind of a lake in a valley.  I felt like when I drove up to this place today it just kinda poofed into existence.  Except for the shoddy playground equipment.  Shoddy in a perfectly acceptable way.  Well worn.
This place has camping areas, paddle boats, swimming, hiking, horseback riding(though I'm pretty sure you have to provide your own horse), mountain biking trail, and a ton of picnic pavilions.  And I NEVER KNEW!  I will be hiking/running this place soon. 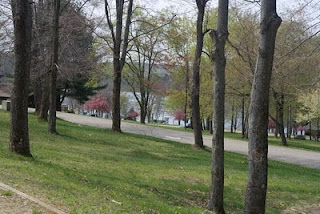 View down to the beach from one of the picnic pavilion/playground areas. 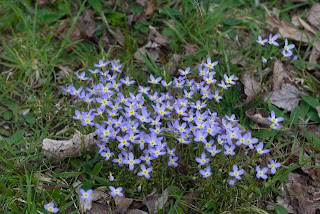 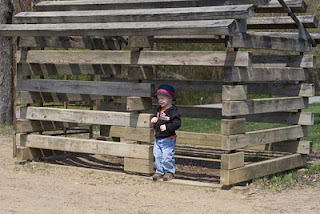 He played in and out of this "house" for quite a while when zoe and I were resting.  There was a freak 3-minute rain shower where we had to pelt into the car, but then we came out and played some more. 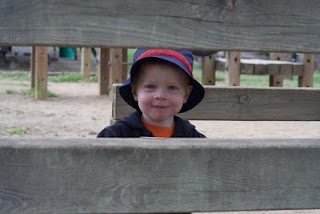 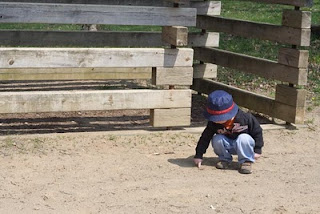 Who can resist this sandy type dirt for playing in. 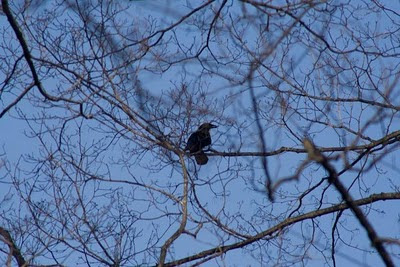 This is my crow friend who comes to the trees outside our home office window everyday when I'm at the computer, spends a few minutes breaking twigs off the tree, flies off to build a nest, then comes back and does it again.  I caught a picture... but really a still photo doesn't do justice to the antics of this bird.  I guess he/she wants flexible twigs, not the flimsy ones from the ground.
Posted by Hrach_Garden at 6:33 PM