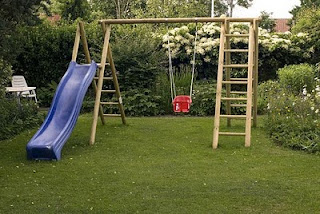 Growing up, I had a swing set.  It was metal, and it was set up in kind of an ]--[-- pattern, with monkeybars, a slide, a couple of swings, rings and a bar. I think that was our second swing set, but I was too little to remember the first.  Anyway, my brother and I played on that swing set until it was dangerous.  Until the slide rusted off, and the thing rocked on the cement block foundation the metal legs were sunk into.  I remember spitting colored spit down the slide when we were eating candy or jawbreakers, inflicting all kinds of torments to stuffed animals, and learning to swing.

But we also lived in the country.  My parents would take us to other playgrounds at schools or in town, but more or less, we were confined to entertaining ourselves on our acre of land, or in the fields and farms surrounding it, which I think was a blessing.  We made up so many games that I think (at least in me, if you met my brother, I don't know what you'd think) built character.

So we live in "town."  We have 2 playgrounds within fairly easy walking distance, with nice swings, monkey bars, sandboxes, those horrible spring animals that I have nightmares about from when I was a child, and much more.  Will I promote some kind of idea that one should stay isolated and insular in ones' own yard by purchasing our own swing set?  Or will it bring me a sort of reprieve to get things done in the yard while the baby is playing happily on his own swing set?  Should I buy something very simple, just a slide and a couple of swings, or go with some elaborate (and expensive) wooden jungle gym so my child will be the envy of his friends?  What if we move?

I know, I'm probably making this more complicated than it needs to be, but I like making an event of going to the playground with him, or meeting hubby at work then walking to one of the playgrounds.  He gets to interact with other kids he wouldn't normally be with, and play on things he doesn't get to much.

Anyone else have experience, opinions on the swing-set dilemma?
Posted by Hrach_Garden at 5:40 PM

You make it sound like you and I are "in conflict" with each other, when really we are just both mutually conflicted by the same things. :)

I'd vote don't bother or something simple, depending on how valuable you think having an immediate distraction for your child would be. It's simply a waste to get something fancy if you have such resources readily available.

We got ours from Craig's list as a "please take this out of our yard" look for a free one and let the fates decide....