I ran 5 miles this morning on a multi-use trail here in Meadville, Ernst Trail.  I had been in a funk and was mainly running and thinking about pointless things that were making me feel even worse and grumpier.  I ran and ran... I passed only 2 guys, but it was nearly raining and threatening storms, so I don't really blame people for staying in.  I like running in the damp green-ness of spring, personally, but whatever floats your boat.

Anyway, I was moderately enjoying the scenery, the birds, the streams, the moss, the trees, the creek, and was on my way back (at about mile 4), and there he was!  An orange brightness on the middle of the path!  A red EFT! 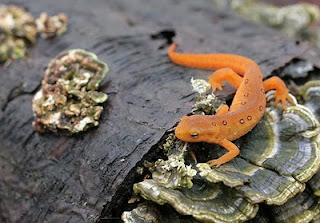 (This is not the one I saw, I generally don't run with my camera)
I picked him up, ooed over him for a moment or three, safety transported him to the side of the trail where he wouldn't come to harm by an oblivious walker or biker, and continued on my run, delighted.  I do really have a thing for reptiles and amphibians.  I wanted to be a herpetologist when I was little.  Really.  Don't ask my husband about our one futile late May bike ride on a different trail where I had to stop every 15-20 feet to remove every red eft in harms way that I saw on the trail.  We didn't make his estimated time, that's for sure.

The rest of my run consisted, instead of me being gloomy about current events, being excited at the prospect of perhaps creating some kind of habitat in my back yard for red-efts and the Eastern Newt in general.  Or maybe a breeding program.  Or at least a minimal terrarium in the living room.  The possibilities are endless!  About a half mile before my run was finished, I found and moved yet one more red eft.  I love rainy spring days!  I love life!  I love EFTS!!

I felt productive when I got home, and after a few rain showers, got outside and removed an invasive weed species (wild garlic mustard - ack!) from an area of my garden that it was taking over, and weeded and sorted through my front garden a bit too.  I now feel better and will go re-heat the tea that I made 3 hours ago and just remembered is sitting on the counter!
Posted by Hrach_Garden at 5:00 PM

I am very much in favor of you saving the red efts when already on foot. :)