and now my house smells very ick of fumes.  Don't worry, I did use a mask, so no brain-damage for me... hopefully... well.. no more than I already have.

The bedroom radiator is done!  I think it looks amazing, so The rest of the radiators in the house may get the same treatment at some point next summer.  I'm not in a big rush... the process was a bit tedious and pretty messy. 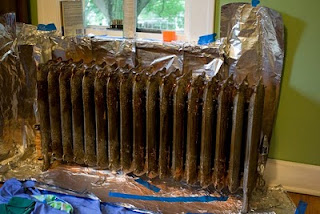 I used aluminum foil to tape off the wall while i was spraying both the orange goop and the spray paint.  I may just get more plastic sheeting next time, but the foil was great to wrap around the nooks and crannies of the radiators.  I did get the floors a little messy, and I think the worse thing was wiping the radiator down after the orange goop was doing it's work.  Definately will use rubber/latex gloves for that process next time, and get some kind of textured rag, or more enduring kitchen scrubbers to wipe off the goop that's done it's job.  The dremel tool really helped for the intricate areas, then i scrubbed the whole thing down with soap and water using more rags and a scrub-brush with towels underneath the thing to catch any drips. 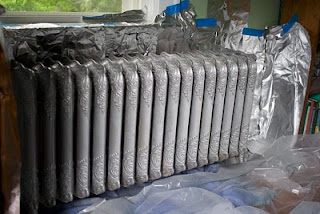 I chose a textured metallic looking spray paint to finish them.  No clear lacquer that I could find would endure the kind of temperatures these things will get to... so I picked out a rustoleum that didn't need a primer.  The smell is awful, but since it's a cool and breezy day, the fumes should dissipate fast.

I think it looks pretty fantastic.  I'll post another picture once it dries and i've removed all the plastic/drop cloth/foil.  Jason says we might leave the foil up to protect us from alien's trying to scan us through that wall.  Suuurreeee.... 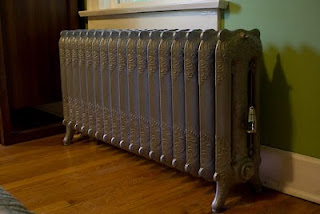 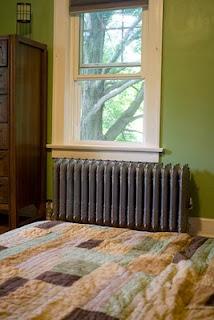