So yesterday morning, we woke up before the sun, woke up the baby, and took an hour and a half drive up to Warren so I could race.  It was cool, in the fifties, but beautiful crisp weather, big puffy clouds with lots of blue sky breaking through... a perfect day for a run.  The drive up was scenic and calm, we found the race start easily, and our friends met us up there well before the beginning of the race.

For once the port-a-johns were clean and uncrowded, and the race crew had set up a station with hand sanitizer and baby wipes, and even bug spray for the people that were running/hiking the four or eleven mile race.  They had fruit and cookies and water available, frankly, this was one of the nicest, best organized race set-ups I've seen.

It was cold, but I took off my jacket before we started, and as I started out, my hands and ears were a little frigid, but I knew they would warm up soon.  The road was dirt, with rocks, and as I was running in my vibrams, I tried to avoid the center of the road, and most of the puddles.

The course was 2 miles uphill, turn around, then 2 miles downhill.  I kept my pace pretty quick, mostly because I was running along-side 2 women who wanted to know more about my shoes.  The benefit of wearing my crazy shoes, is that I'm always getting to talk about them.... at least 10 people had commented on them pre-race.

The thick forest, the cool breeze, the conversation, let me keep my pace under 10 min miles as I continued up the hill.  I felt good.  I lost my companions as we came to the turn around... they continued on the 11 mile run, which though sorely tempted, I knew I wasn't ready for.   Back down the hill.

I high-fived my friend as I passed her going down the hill - she and her friends were only a minute or so behind me.  I opened up and let gravity give me more speed.  I felt great.  I felt only a bit guilty as I passed one woman about a half mile from the finish, and though she stayed right behind me, when I could see the final turn towards the finish line, I opened up my stride and did the patented final sprint towards the finish line. 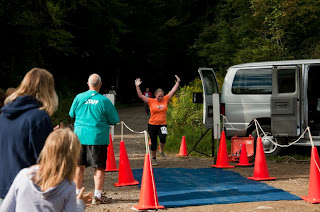 This was a great race.  Being a trail race took a lot of the pressure off the idea of pace and competition, but I still did great, finishing 22nd overall, first in my age group with a time of 39:18.  Pace of 9:48 per mile.

We waited for the rest of our group to finish, cheered them on, then headed out.  I changed clothing (awkwardly as always) in the car, then we went off to breakfast.

This is definitely a race I'll be signing up for again next year.
Posted by Hrach_Garden at 7:26 AM