Running is some sort of sickness, I'm sure.  Today I was determined to run.  A long run.  I had a race last Saturday, and after feeling unwell the past 2 days due to tiredness, I decided I MUST run today.

It was pouring all night.  It poured most of the morning.  I watched the sun attempt to break through the puffy grey fall rain clouds.  It failed.  Around 10:30, my mom called.  I peered out the window, It was not raining.  I told her I was bringing the kiddo up, and was going to run a loop there.

I suited up, in shorts and sleeveless shirt.  I thought this clothing would be ok for mid-sixties.  I pulled on my five fingers, got the stuff together for the kid, and peered at the sky as I threw us into the car and got moving.  It's a 10 minute drive to my mom's, and on the way, the sky opened up.  I sighed inwardly.   I kicked the wipers up to high, sang Beatles songs at the top of my lungs (I'll follow the sun, of course), and the rain was back down to a sprinkle as I pulled into the driveway.

I stepped into my mom's and the downpour I had driven through on the way caught up.  Sheets of rain made the leaves on her trees dance.  I flipped on the weather channel and sat, feeling slightly defeated.  The rain suddenly stopped and the weather channel confirmed the shower that had hit would be the last for a while.  I fled.

8 miles.  On mostly dirt roads, my feet sinking into them slightly as I went.  Trees turning, being sprinkled by trees still wet with rain, running past an old farm, clicking at horses as I ran by, admiring the low deep grey clouds... but it didn't start raining again.  I got a bit misted on during the last mile, but... it was a great run...

Tomorrow, I will plant my newly arrived garlic. 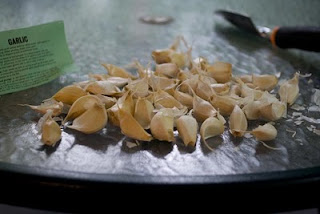 These are California Extra Select (shrug)  they smell good, look good, and will hopefully get me a lot of garlic next year.  I think I'm going to have to fill up an entire raised bed for them though... which means the purpose of the latest raised bed may change from a Perennial bed, to another lettuce/veggie bed in the spring.  We'll see what happens.
Posted by Hrach_Garden at 6:37 PM

That garlic looks like it will fill about a third of one of your raised beds. Watch out, growing garlic is highly addictive!

I don't understand what you runners find so attractive about all that running. :)

I'm not sure why I'm so attracted to the running... except I really love hiking and nature, and it's a way to get out there and enjoy it, only at slightly faster speeds, so I can get home sooner and get more stuff done... and I feel like I'm making myself healthier in process. Trail running is my favorite...

The garlic did fill up one entire raised bed, but I think I'm still going to separate my perennials into the other bed. I had way too many tomatoes this year anyway, so cutting down on the amount of tomato plants will be ok.