Out of the Comfort Zone: The Susquehannock Trail System Backpacking Trip - Day Three

(Part One, if you missed it. Part Two, Part Three, Part Four.)

Now, before I get into day three, I've been painting this trip as realistically as I can, while skipping some of the more... trivial details.  Truth is, I was pretty comfortable on the trail.  Going to the bathroom isn't an issue, I've been peeing outside since I was little (I felt that it was unfair that boys could pee wherever they wanted, so as an outdoorsy kid, I remedied that injustice for myself pretty early), and as a trail runner... well, when you gotta go, you gotta go.

I was fine drinking (treated) creek water.  I was using a sawyer mini filter to filter my water right as I drank it, and I had a steri-pen that I was treating my water before cooking with it during meals.  Up until I couple of years ago, I was terrified that every time I was lighting my little folding stove, the fuel container was going to explode (I'm pretty comfortable with it now), and I've figured out what kind of foods work best for the trail (with some help from Rich and Alisha).

I'm not used to carrying weight.  My pack weighed around 33 pounds when I started out.  My back and shoulders actually did really well for the trip.  My feet were another story.  I was wearing running shoes, and by the end of the first day, I had a couple of pretty bad hot-spots, and starting out the second day was fairly painful to start, but once I started walking, the pain faded.  I tried taping / bandaging my feet, but the bandages ended up smooshing around in my wet socks and shoes, making the rubbing and blisters worse.

The third day, I wore sock liners and then toe socks, which seemed to do ok.  My feet felt pretty good.  I however, was developing some severe pain in my left shin, but I clenched my teeth, and moved forward.  There was no "DNF" in this hike.  So I hiked.  I had a couple near-tearful moments going downhill a few times, when my leg would feel particularly bad, but I took a couple deep breaths, looked at some flowers, and pushed on.  Day three and four were rough for me, pain wise, but I tried not to let it detract from my experience.

I took ibuprofen, I used body glide, I had sun-block and chap-stick.  I brushed my teeth every morning and every night.  I put powder on my feet every night, and put cocoa butter on them every morning.  Besides the few things I've mentioned, I felt good, I slept pretty good each night, and I never felt like I was missing something or lacking anything, though I will do a better job choosing footwear and sock layering next time.

I want to say the third day of hiking was probably the best weather day, and a pretty good day in general.  The hiking was challenging, but not as difficult as day two, and we had settled into a routine. 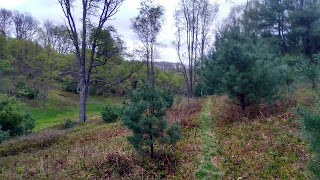 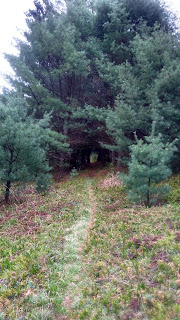 The highlight of the day would be reaching the small village of Cross Forks, which had a store, bar, and maybe bathrooms!  We had hoped to reach it the day before, but had underestimated the distance, so we looked forward to an early Wednesday lunch.  As the day continued, we realized we were following Elk tracks along the trail.  We followed them all the way into Cross Forks. 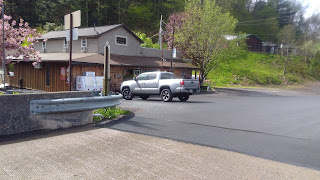 
We came down into Cross Forks into a little bit of a rain shower.  We went into the store and bought sandwiches and drinks, and I replenished my Swedish Fish.  I wasn't very hungry, so I ate part of my sub and some chips, and knew I didn't want to be too stuffed for the next climb out of the valley.

The clouds broke as we left town, and the day became beautiful, crisp and sunny. 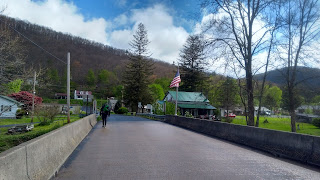 Leaving Cross Forks, over Kettle Creek
There was a mile of road followed by a pretty challenging mile uphill.  I set off by myself for a little while, and felt pretty strong.  We all gathered at the top of the hill, and I popped on my ipod on and led the way along some of the nicest trail we had been on.  Flat and gradually down, we approached the Hammersly wild area, and a section where a remote "Pool" was. 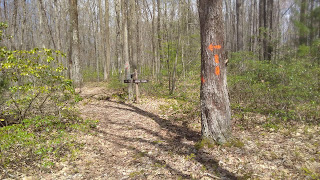 The trail continued to be very well marked. 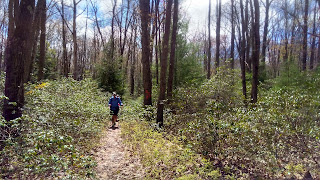 Mountain Laurel lined paths.  I bet this is amazing in mid-June. 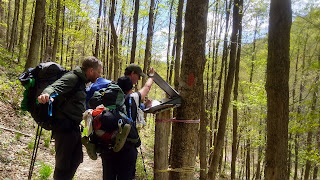 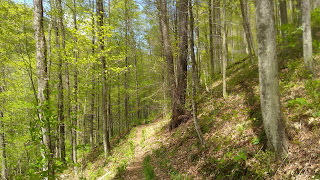 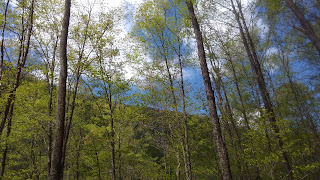 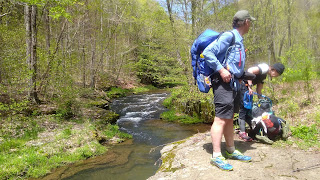 Lunch break at "The Pool"  A very remote portion of the trail.  Five miles of challenging hiking from the closest road. 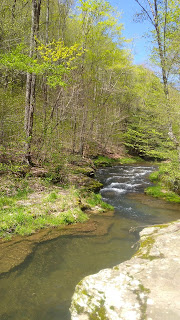 Unfortunately, it was a little too cold to see how nice the swimming would be. 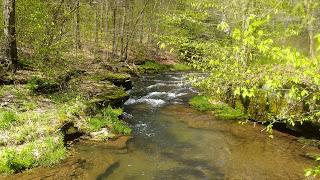 It was a good spot to fill up my water pack. 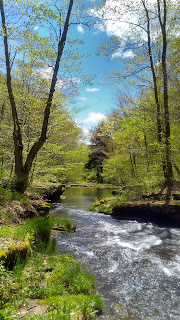 And to just enjoy the scenery for a little while.

I think the thing that made me both happy and sad about the area around "The Pool" was it's remote location.  I thought how neat it would be to bring my son back there, and show him, and let him swim in the creek, but at nine years old, with how challenging the trail was in this part, I knew it might be a bit much for him.  It gives me something to look forward to doing with him, though... 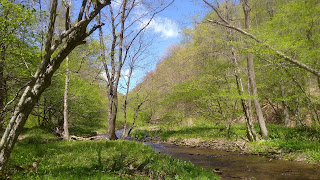 Leaving the area of Hammersley Fork

We stopped for dinner at "Duff's Camp", or as it was so proclaimed on a small wooden sign, and then we continued on our way. We were all giggly and in good spirits after a very good day of hiking. Little did we know... 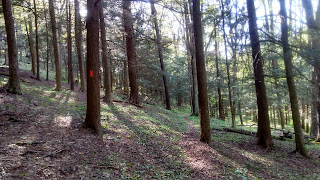 The trail after "Duff's Camp" 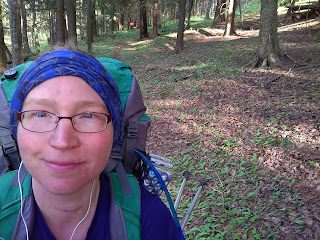 "Three days on the trail me."  I think this was right after I faceplanted in some (luckily soft) dirt.

We came to a railroad grade that went a long a wide valley, as twilight was just starting to fall.  We knew we had one more big hill before we came back to a campsite down along another creek. We found a sign in box in the valley, near some houses - the first real houses we'd seen that weren't in Cross Forks.  We started up the hill.  There was a gorgeous view, but it was a super steep up, and was long, and came into some very challenging side-trail down. 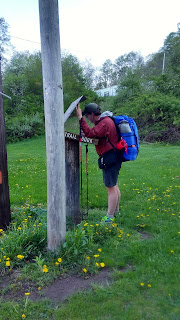 Rich signing us in. 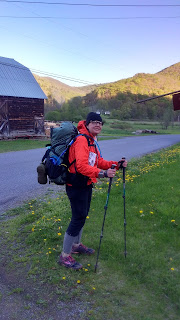 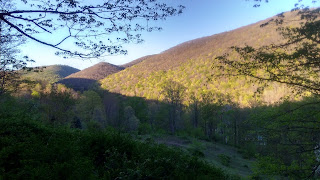 The last view of the evening.  Beautiful old mountains.

The camp wasn't the best, but night was falling, we were exhausted, and the temps were dropping.  We set up fast, I layered all my clothes I had on, and curled into my sleeping bag.  I was a little sad.  It was the last night of vacation, and tomorrow we would finish up and return to the real world...

Part One, if you missed it. Part Two, Part Three, Part Four.
Posted by Hrach_Garden at 8:24 PM