Out of the Comfort Zone: The Susquehannock Trail System Backpacking Trip - Day Four

(Part One, if you missed it. Part Two, Part Three, Part Four.)

Day four started out cold.  It had been the coldest over-night so far, with clear skies, though over night, a few drizzles moved in, and the morning was cloudy and cool.  We got going, knowing this was our shortest mileage day, and that we would be back home before the end of the day.

My left shin and ankle were still hurting pretty bad, but I set off strong, pushing myself first since I was the slowest on the hills.  I was also both eager to get out of the woods, and not really at all.  There is something basic in the immediacy of the outdoors. Do what you need when you need, then keep going.  Especially when other people depend on you.

I hiked alone quite a bit of the morning, enjoying the woods and sights and sounds.  I listened to a little bit of music, but it was making me too sad, so I stuck to the sound of streams and the wind and birdsong. 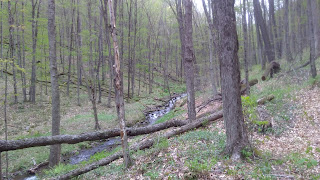 The stream flowing back towards camp. 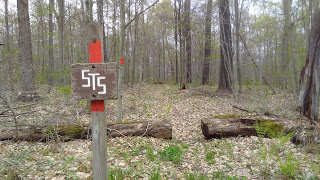 We stopped for lunch along a creek with about 10 miles left to go in our hike. The spot was really nice, and we took a little more time than usual, knowing it was our last meal on the trail.  It was in a nice spot by a creek, and we knew we only had one more big climb before the end of our hike.  The temps were cooler and the wind was picking up, which made getting moving more appealing.

We passed through Patterson State Park, which was just a tiny campground, but they had toilets!  The trail became very easy and rolling, and we passed some beautiful areas.  I took a lot less pictures - I think mostly because we kept moving, and I was enjoying just being in the woods.

It's hard to describe that last few hours on the trail.   There was an excitement that we had finished the circuit of this trail, but also a sadness that we were done.  Happy that we would be in warm dry homes at the end of the day, but a little sad that soon we'd be glued to our phones and screens.  Wanting the comfort of a hot meal without sitting on the ground, but not missing the idea of crowds or traffic.

So we finished up in a drizzle, in the cold, and we waited so that we all could finish together.  And we did.  We cleaned up, drove into the nearest town together, had a nice dinner (with a lot of hot tea).  We got home very late, and I got a very long shower, and spread out all my stuff to dry, and fell asleep. 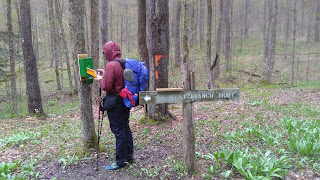 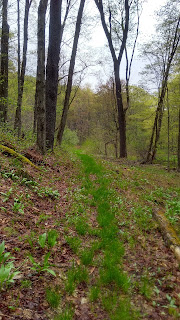 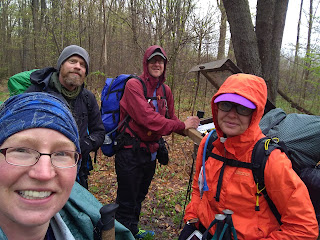 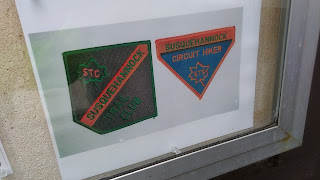 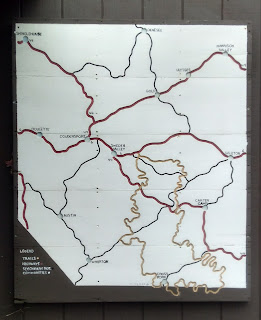 Wooden map at the trailhead - we followed the yellow bit.

I learned a lot on this trip, about backpacking, about myself.  I had taken a little journal - I only wrote in it once.  I think I'd take it again though, especially on a trip with a little more down time.  I took soap to wash my clothes in - I wouldn't take that on a hike less than a week long, I think, I didn't use it.  I took pretty much the right amount of clothing, but I'd figure my feet out better before next time.  I think there's something to doubling up on socks.  I took just a little too much food, but only just.  Everything else I was pretty happy with.

I want to thank Rich and Alisha and Daren - they know I'm still new at this, and give me advice while still letting me figure out stuff for myself.  I wouldn't be where I am without them.  And they're great at giving you space for yourself on a hike, while still being there when you want company, and making sure you're eating and drinking when you need to.

I can't wait to get out there on the next trip!

Part One, if you missed it. Part Two, Part Three, Part Four.
Posted by Hrach_Garden at 7:49 AM