Out of the Comfort Zone: The Susquehannock Trail System Backpacking Trip - Day Two

Part One, if you missed it. Part Two, Part Three, Part Four.

Day Two started out slow.  There's something about waking up outside, but in a tent, as the dark gets a little less dark, and maybe you here a chirp of bird-song, and you can start to see the side of the tent in front of you, and though you're not sure what time it is, you're awake, and you get moving.

We had breakfast, packed up camp, and headed out.  We were hoping to get some good miles in.  There had been no bear activity, that we could see, but there were a couple times in the middle of the night where the peepers suddenly were silent, and then after a few minutes, would resume, so something had wandered by. 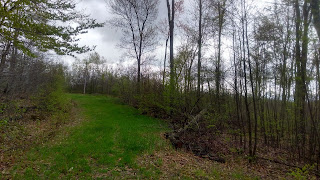 The day started out pretty easy, and after a couple of easy miles, we descended into Ole Bull State Park and campground.  We took a break to fix feet and have a snack, fill our water at an on site pump, and use real toilets!  Woo! 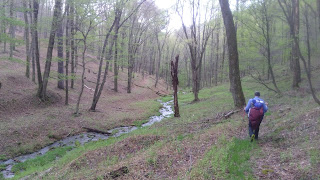 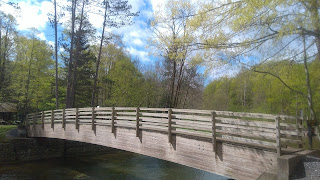 The day was brightening.  Bridge over Kettle Creek.

Now I like maps.  I like having them on hiking trips, mostly because they can save your life and keep you from getting lost.  But I also don't like to look at them in too much detail.  I knew a big hill was coming, but I didn't know how big.  We climbed and climbed and climbed out of the park.  We kept each other going, and finally made it to the top.  This was the first in what would be a very challenging day. 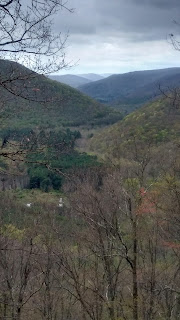 The vista after the climb away from Ole Bull 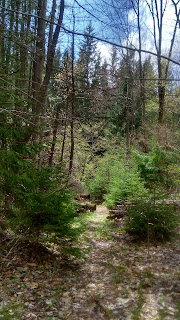 The scenery was lovely, but was even better with a little bit of blue sky.

We came to a creepy part of the trail called Spook Hollow, where the sign said "Stay to the center of the trail, stay within the sight of companions, refrain from looking back, Do Not Try To Run"  The pines and spruces grow so close together in this section, that when the wind blows, they creak and groan.  It was a rather spooky section of the trail, and I'm glad it was daylight and the sun was bright at this point, or it would've been scarier. 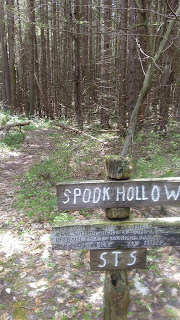 The beginning of Spook Hollow 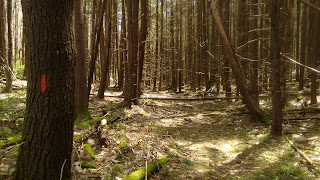 The trees were thick, making the woods dark, even in the sun. 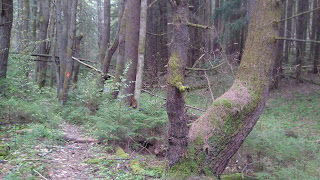 There were some really amazing trees.

The day was long and difficult.  There were a few sections of old railroad grade, but then we came to the Doughnut Trail.  It was a super steep downhill grade, followed by a super steep uphill.  Followed by more steep down, and some rolling tough double track and gas line.  We were all spent.  We were incredibly lucky though, finding the campsite we had been shooting for was a shelter!  It made the long push at the end of the day worth it. 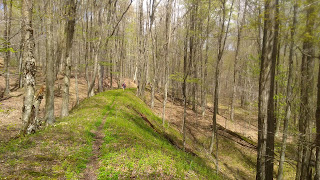 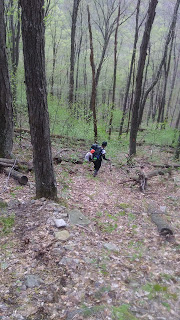 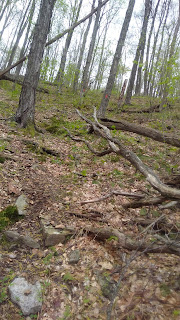 Looking back up.  Not sure if the camera really captures how steep these hills were. 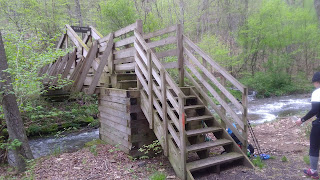 Bridge at the bottom of the hill, then heading back up. 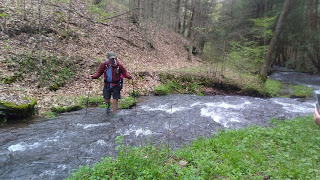 There were a lot of creek crossings - the bridges were no more.  Ok, mostly it was us crossing the same creek multiple times 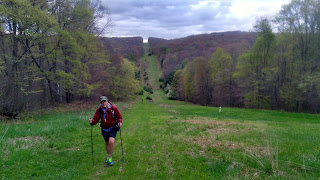 Looking behind from where we had come, going up the last hill before we hit the shelter.

Having the shelter made for a very cheerful evening, but we decided that we would get up earlier and get going quicker the next day, trying for as many miles as we could cover on Wednesday to make our last day as short as we could.  We were 42.5 miles in, roughly, pretty much halfway done, and it was our hardest day. 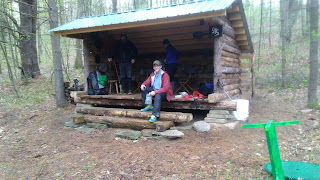 
Part One, if you missed it. Part Two, Part Three, Part Four.
Posted by Hrach_Garden at 9:34 PM