No, I'm not tired of gardening.  I think I'll have the tomatoes and broccoli and other seedlings hardened off enough to put in to the beds next week.  Today I got another raised bed in.  And ran out of dirt when it was halfway full. 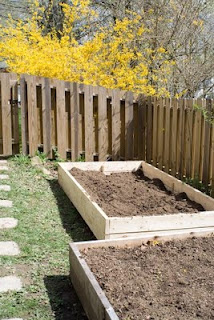 So I'll be heading over to home depot to get a few (cheap) bags of topsoil tomorrow... because I think a few bags will do it, and I'm not going to get another truck pulling in here... I do need to get mulch in a couple weeks though...

So now I have many raised beds. 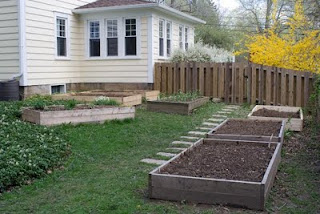 Seven.  One is dedicated to perennials for propagation of more flowers to move around to different places, and one is dedicated to garlic.  One will be mostly broccoli, and one to two will be for tomatoes.  One is already full of lettuce, so I think I'm booked up with most of the seedlings I have.  I'm going to put a few more stepping stones in tomorrow, and really try to get the dirt in that last bed evened out. 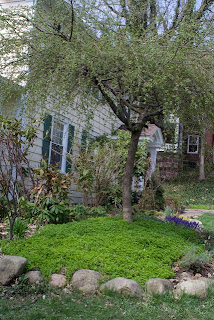 With all the rain we've had in the past week, and the sun finally peeking out the last two days, things are greeny up like crazy.  Most of the trees are blooming and leafing out (I'm so so so glad I do not have any seasonal allergies), and I think I'm going to go for a trail run tonight to catch how all the little spring blooms are doing.  It should be about time for trillium, maybe sassafras, maybe wood anemones... we'll see! 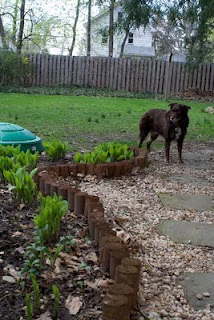 Hosta are really opening up. 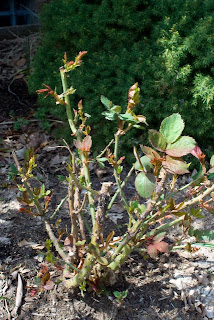 My roses are doing really well.  One was a bit sluggish on the output, and i'm thinking of trimming it up a bit, since it's not budding out as much as the other two. 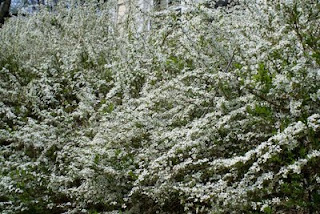 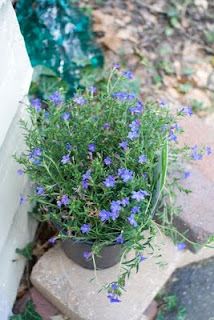 Saw this perennial and scooped it up.  I dislike buying plants at the retail giants as a general rule, but when I see something I really like, I'll grab it.  I hope this one does well and comes back next year.  It's called Lithodora(Grace Ward).  Not sure we're I'm going to put it in, but I'll figure out a spot.

Now for a nap before my run!
Posted by Hrach_Garden at 3:38 PM